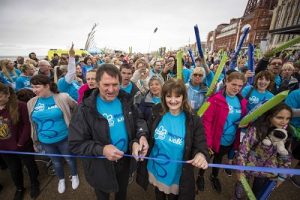 A former Nottingham Forest footballer living with dementia is determined to help raise funds for the Alzheimer’s Society.

Mr Serella joined Anne Nolan in opening the charity’s memory walk in Blackpool and then handed out medals to fundraisers on the finishing line in the shadow of the town’s legendary tower.

He said: “I never shirked a challenge when I was a footballer and I don’t intend to start now with any challenge that dementia puts in front of me.

“It’s far from ideal getting a dementia diagnosis but it’s not the end of the world and even though I’m forgetful I’m still a happy sort of bloke and nothing will change that. Dementia is something I’ve got to take in my stride.”

Jeremy Huges, chief executive for the Alzheimer’s Society, said: “Dementia is the UK’s biggest killer – someone develops dementia every three minutes, with 1 million set to develop the condition by 2021.

“We are enormously grateful that Dave and his family are rising to the huge challenge it poses by unity with Alzheimer’s Society to help us defeat dementia.”

Alzheimer’s Society is urging people to unite against dementia and to sign up for your own memory walk, visit memorywalk.org.uk/organise