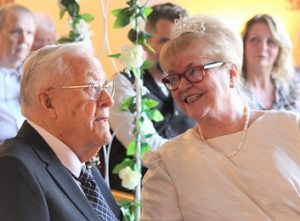 Two residents at Redmaybe View housing care scheme in Norwich have celebrated their marriage on 20 October, following an official ceremony at a local church.

Rosie Bell, 71, and Barry Williamson, 84, were joined by over 100 family, friends, residents and staff to celebrate the occasion, with numerous donations made by businesses and well-wishers to make the day extra special.

Ms Bell – now Mrs Williamson – said her new husband instantly swept her off her feet when he moved into his flat at Redmayne View in 2014.

She said: “I knew there was a spark straight away. As soon as I saw him I thought he looked a bit of alright!

“We used to play cards together and he would come down for a coffee in the morning so we got to know each other.”

When the newlyweds first met, Mrs Williamson’s terminally ill husband was being cared for in a nursing home and she said dealing with him not coming home was painful.

Mr Williamson lost his wife four years ago and Mrs Williamson said their friendship started to blossom into love after her husband’s death two years ago.

Sandra Spanton, manager at the scheme, said: “We put out an appeal on social media for help on the day and so many people came forward with offers of help, including an organ player, photographer, car and chauffer, an arch for the ceremony and so many other things.

“So many wonderful people got involved.”

The newlyweds said they are looking forward to spending Christmas together with their families in their new shared flat.

Derbyshire provider sells care homes as it slips into administration