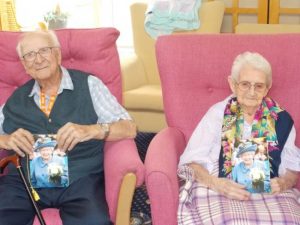 Two residents at a Watford care home have both celebrated their 100th birthday.

Both residents celebrated their day with a party at their home with the families in attendance.

Mr Hawes has more than 50 of his family and friends visit, including his ten-year-old grandson who shares the same birthday.

Mr Hawes said: “I’ve had a good life and my family is definitely the most important thing for me. It was wonderful turning 100.”

Ms Coffin has been a fan of Tottenham Hotspurs fan since was eight-years-old and was very excited when she received a surprise birthday letter from Tottenham Manager Mauricio Pochettino.

“My passion for Tottenham hasn’t changed since I was an eight-year-old girl. I feel no different now to when I was 50.”