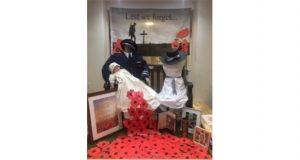 A true-love story is being told over and over again through a Skelmersdale care home to commemorate Remembrance Day.

For the third consecutive year, ‘The Lovers’ have returned to the Birch Green Care Home as residents and staff continue to follow their story in the next chapter of their lives.

‘The Lovers’ have now appeared with a babe-in-arms with the baby’s dress starting off a sea of poppies – which lead to approximately 1,000 poppies to be seen by the care team, families and residents.

Staff said they are proud to show off the residents’ efforts who all got involved in creating them.

Gill Seddon, activities coordinator at Birch Green Care Home, said: “We have a lot of excitement around the display event.

“We sat around this year and talked about what could be the next chapter and decided that a baby would bring wonderful news.”

‘The Lovers’ love story started in 2016 with two mannequins representing wartime lovers where they sat on a bench as a sea of poppies falling from the soldier’s uniform.

In 2017, the gentleman returned maimed from the war, but they were celebrating being newlyweds where the sea of poppies started from her dress.

“The display means so much to them because it’s so close to everybody’s heart – residents put their heart and soul into it and can spend hours making the poppies.

“Although figures are only mannequins, they have become somewhat celebrities in our care home and people look forward to see them.”