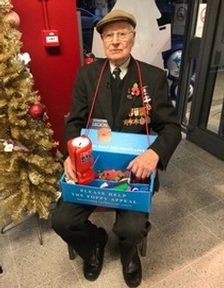 Walter ‘Wally’ Randal has been named as Britain’s oldest poppy seller and has been selling poppies for the Royal British Legion for the past 70 years.

The WW2 veteran said: “I like to do my little bit to help the heroes, like those on the Invictus Games.

“I hope to be selling on Mondays and Wednesdays for a few hours or for as long as I have the energy.”

Mr Randal was born in Buckinghamshire and has been selling poppies in Leighton Buzzard, since the early 1950s.

The veteran was in the service corps and is now the club chairman for the Leighton Buzzard Royal British Legion and the proud recipient of a lifetime certificate for services to the local branch.

“Old friends come up and it’s amazing how generous people are. They come and put money in the box and say, ‘I have already got a poppy.’

“I am looking forward to it, I do enjoy it and people are so generous.”

The Royal British Legion is calling on the nation to back its ‘Thank You’ movement in the year that marks the end of the First World Ward 100 anniversary – and to wear their poppies with pride.

Mr Randal will return to the retail shop Wilko in Bedfordshire to continue to sell poppies.